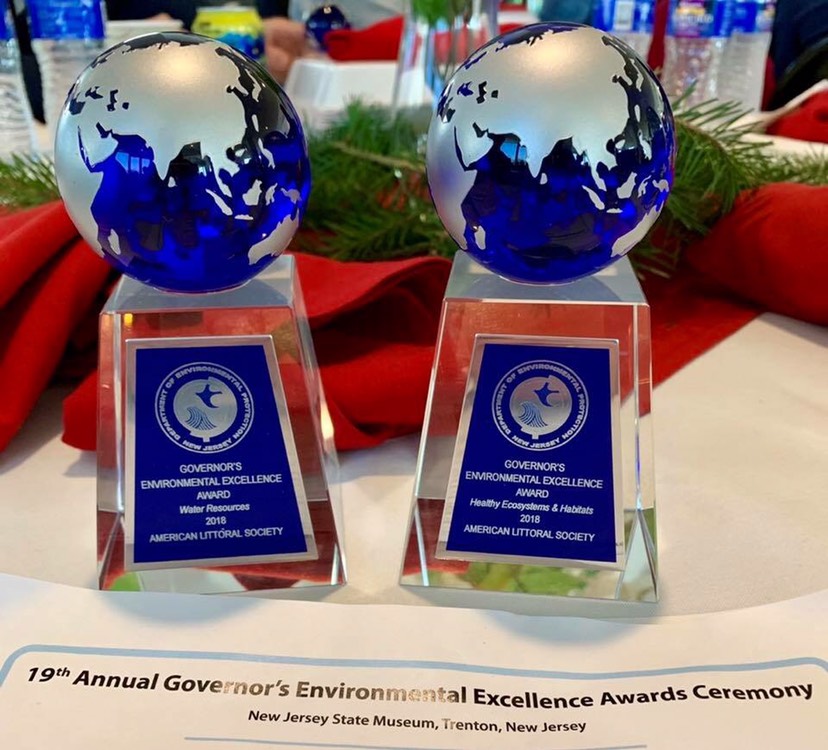 The American Littoral Society was awarded the Governor’s Environmental Excellence Award in the Water Resources category this year for their Clean Water, Beautiful Bay projects in Barnegat Bay.

According to the Barnegat Bay Partnership, over 33% of the Barnegat Bay watershed has been altered to urban land cover. The construction of communities, roads and business has greatly increased the total amount of impervious surfaces in the watershed. With the added impervious cover has come a steady increase in the amount of nutrients, sediment, pathogens and other contaminants transported into the Bay by runoff. This accelerated the degradation of the Bay’s water quality and triggered changes to the Bay’s ecology.

Recognizing the importance of the Barnegat Bay, the American Littoral Society proposed green infrastructure measures to decrease runoff volume and nutrient loading to the bay and its tributaries.  Princeton Hydro was contracted by American Littoral Society to design four projects and provide oversight on the construction of the bioretention basins, rain gardens, porous pavement, etc. The projects were funded by the largest 319 grant ever administered by the NJDEP, totaling around $1 million. The project aimed to:

From our team, Dr. Steve Souza and Paul Cooper worked to develop a unique Scoring Matrix for the selection of best management practices for retrofit projects. They have been asked several times to present on the matrix and demonstrate how to beneficially utilize it. In addition to design, Princeton Hydro participated in much of the public outreach for these projects, including giving presentations, leading workshops, and helping high school students plant vegetation around their school.

According to NJDEP, the Clean Water, Beautiful Bay projects were successful in reducing flooding in a private residential homeowner community, improving a stormwater basin and public open space area at a hospital, introducing golf course staff and golfers to environmentally friendly golf course management practices, and engaging high school students in planting projects on school property.  The projects demonstrated that green infrastructure construction projects can reduce flooding and water pollution at business, community, school and public recreation locations, and can be publicly accepted and valued for the environmentally protective and restorative benefits they provide to Barnegat Bay.