On the Paulins Kill, the 100-year old Columbia Lake Dam has almost been completely removed, and fish passage has been restored!  Since the first cut was executed on the main dam in August, many exciting advances have been made towards restoring the Paulins Kill back to its natural state. Check out the video below, courtesy of the New Jersey Nature Conservancy Volunteer Drone Team.

Piece by piece, the dam was notched out throughout the fall season and is now completely removed with the exception of the dam apron, the horizontal concrete structure that sits downstream of the dam, and the section of the dam that sits below the riverbed. The part of the dam in the riverbed is now being removed all the way down  to three feet under the ground. The full removal is estimated to be complete by mid-March. In mid-August, the first cut was widened to 80 feet, allowing for better management of high flows during storm events, which had been posing a challenge immediately following the first cut.

In late August, the installation of rock vanes at the Brugler Road Bridge began. Rock vanes are engineered, in-stream structures that help to stabilize a channel while enhancing aquatic habitat and movement.

The rock vanes installed at the Brugler Road Bridge site are cross vanes. Cross vanes consist of a set of boulders angled upstream on a river, with another section of smaller rocks placed upstream. The taller sections of the cross vanes deflect the streamflow away from the banks, decreasing scouring effects. Instead, the flow travels over the rock walls and concentrates down the center of the channel, creating a deep and elongated pool in the middle of the stream.

Velocities between the notches in the rock vanes were evaluated using a velocity meter in accordance with the design specifications originally proposed. Based on the U.S. Fish and Wildlife Service fish passage design criteria, velocities in the notches could not be greater than 8.25 feet per second. All of the velocity measurements in this rock vane were below the maximum thresholds, ensuring no blockage of fish passage is made through the vanes. 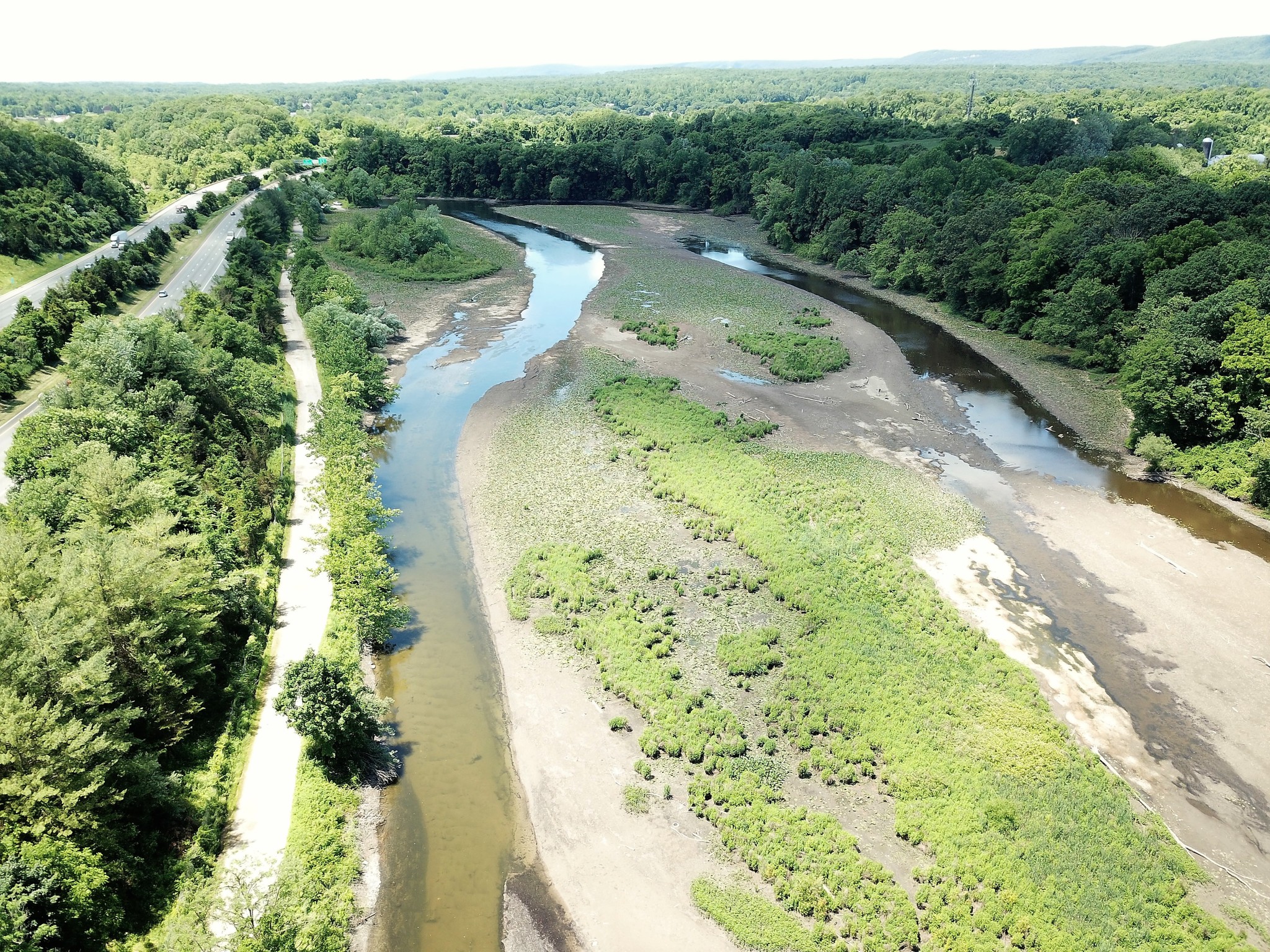 Since the removal of the dam began, vegetative growth from the natural seedbed of the upper impoundment has been observed (see photo below).

In October, scour protection installation commenced at the Warrington Road Bridge site. After the team conducted geotechnical test pits, they discovered that a concrete scour wall that slopes out to the Paulins Kill was present and deep enough to be able to install rock at the necessary depth. They also found that the existing gabions, caged baskets filled with rock or concrete often used to protect against erosion, were intact and could be left in place. The team installed four (4) feet of riprap under and around the bridge in the riverbed and tied it into the existing grade of the banks. 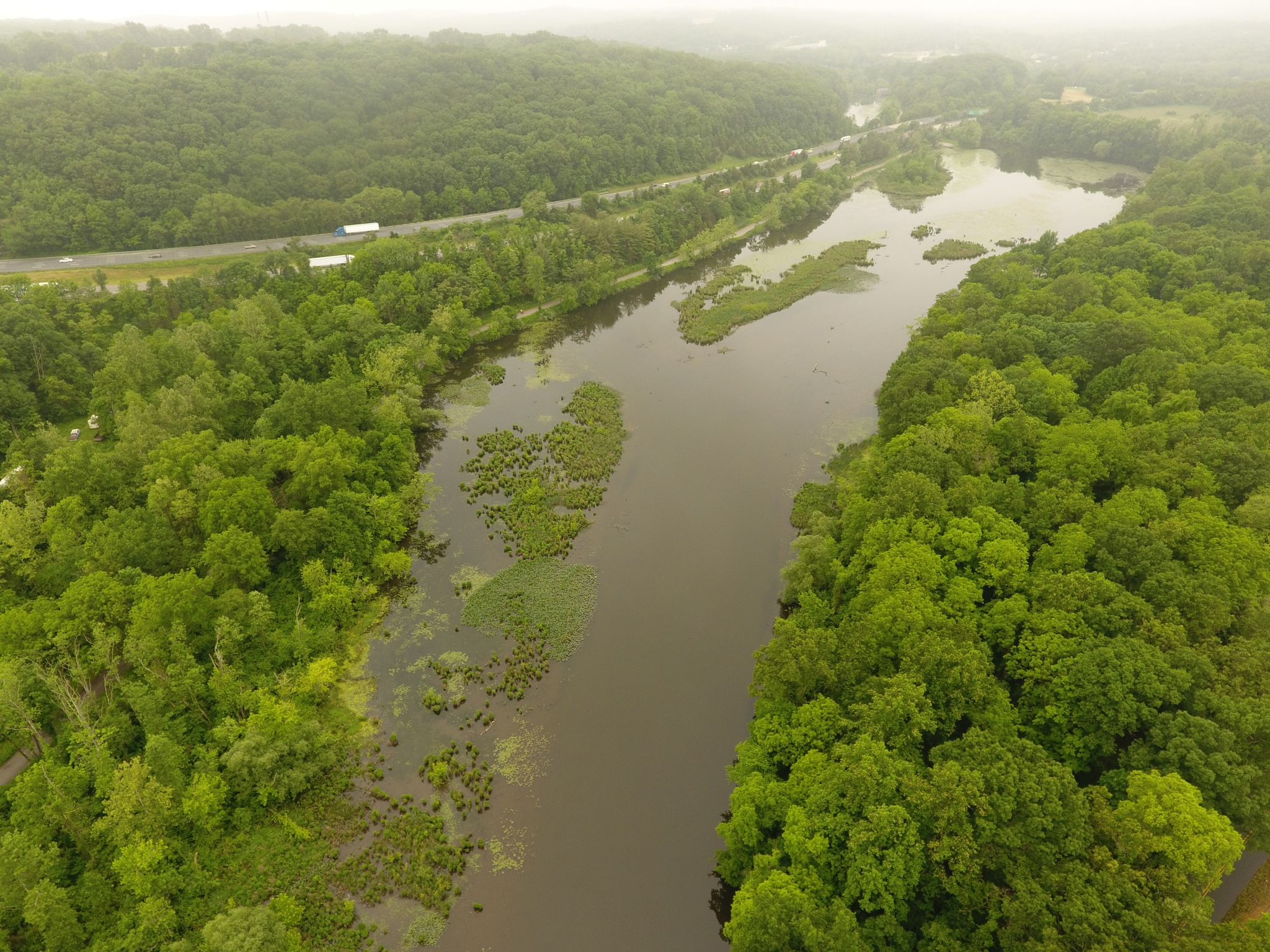 The original notch in the dam was lowered one foot per day starting in mid-December, reducing water surface elevations down to the apron elevation during the month of January.

To accommodate NJ Fish and Wildlife’s request for animal passage under the I-80 bridges, an area of the previously installed riprap on the northwest abutment wall was flattened out and filled in with river cobble. This path will promote wildlife movement under the bridge as opposed to through the existing tunnel.

Currently, rock vanes are being installed under the I-80 bridges specifically to enhance fish passage. These structures vary slightly from the rock vanes at the Brugler Road Bridge site, as they are designed to slow river flow, helping migrating fish travel upstream and traverse a 5-foot elevation difference in the streambed, much like a fish ladder.

These rock vanes are more than halfway completed and are on track to be finished in time for fish populations to make full use of them.  The next steps are to finish the demolition of the dam and the construction of the fish passage rock vanes under the I-80 bridges, plant vegetation throughout the upper impoundment, create a recreational trail through the upper impoundment, and plan for fishing and boating access! Stay tuned for more exciting developments on this incredible project.

Princeton Hydro has designed, permitted, and overseen the reconstruction, repair, and removal of a dozens of small and large dams in the Northeast. To learn more about our fish passage and dam removal engineering services, visit: bit.ly/DamBarrier.